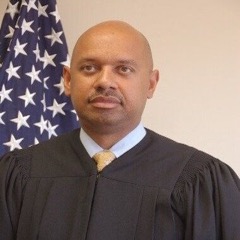 Owen C. Wilson is the great-great-nephew of program namesake, John Mitchell, Jr., editor of the black newspaper The Richmond Planet and one of the great anti-lynching advocates in American history. Owen C. Wilson was born in Richmond, Virginia. Upon graduation from Marshall-Walker High School (with honors), he later earned a B.S. in Political Science in 1987 from James Madison University and a J.D. from the College of William and Mary Marshall-Wythe School of Law in 1991. He served as a Law Clerk at the Armed Services Board of Contract Appeals from 1991 to 1993. Upon leaving the Board, he joined the Office of the General Counsel for the Navy and reported to the Military Sealift Command as an Assistant Counsel (1993 – 1998) and later appointed Associate Counsel (1998 – 2006) for the Special Missions and Prepositioning programs. He transferred to the Naval Sea Systems Command where he provided advice on major weapons systems procurements (electronic warfare and naval gun programs) and the Deactivated Ship Donation program. On September 17, 2007, he was appointed to the Armed Services Board of Contract Appeals. Judge Wilson resides in Springfield, VA with his wife, Angela (Delta Sigma Theta Sorority, Inc.), and their two sons, David and Matthew, and dog, Rocco.