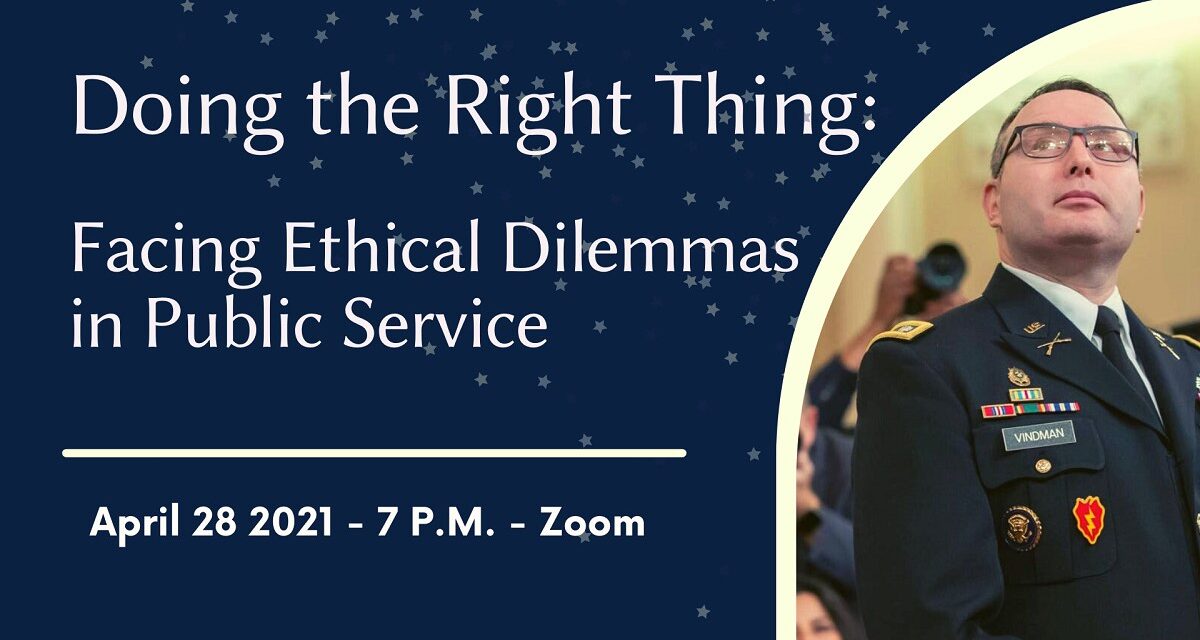 Lt. Col. Vindman, who testified in the 2019 impeachment trial of then President Trump, will discuss ethical dilemmas, professional values, and personal faith with Mason students.

The event will take place over Zoom and begins at 7:00 PM (EST). Attendees can register online.

The virtual discussion is being organized by Mason’s Judaic Studies Council. Among the event’s cosponsors are the Department of Religious Studies, the John Mitchell, Jr. Program for History, Justice, and Race, the Honors College, the College of Humanities and Social Sciences (CHSS), University Life, Mason Hillel, Chabad of GMU, the Alpha Epsilon Pi chapter at GMU, the Pozez Jewish Community Center of Norther Virginia, and the Jewish Community Relations Council of Greater Washington.

Lt. Col. Vindman was thrust into the national spotlight in 2019 when he testified during the first impeachment trial of then President Donald J. Trump.

Lt. Col. Vindman joined the National Security Council in 2018, where he implemented the Trump administration’s Ukraine policy. In this role, he was one of a number of people on the July 25th, 2019, phone call at the heart of the impeachment inquiry into President Trump, which examined the latter’s pressure on Ukrainian President Volodymyr Zelensky to investigate the family of current President Joe Biden during the 2020 presidential election campaign.

“I was concerned by the call. I did not think it was proper to demand that a foreign government investigate a U.S. citizen,” Lt. Col. Vindman told investigators during his testimony at the impeachment trial.

“I realized that if Ukraine pursued an investigation into the Bidens and Burisma, it would likely be interpreted as a partisan play, which would undoubtedly result in Ukraine losing the bipartisan support it has thus far maintained,” Lt. Col. Vindman continued. “This would all undermine U.S. national security.”

During his remarks at George Mason University on April 28th, Lt. Col. Vindman will discuss the importance of “doing the right thing” as a public servant. His own testimony during the impeachment trial was framed by his personal and professional values.

“I sit here, as a Lieutenant Colonel in the United States Army, an immigrant,” he said. “My family fled the Soviet Union when I was three and a half years old.”

Born in Kiev to a Jewish family, he came to the United States with his brothers (twin Yevgeny and older brother Leonid), his father, and his maternal grandmother following his mother’s death.

His career with the United States Army spanned more than two decades and included serving as a Foreign Area Officer specializing in Eurasia.

His testimony during the impeachment trial resulted in retaliation from President Trump, who fired Lt. Colonel Vindman from the NSC and also ousted his twin brother, who was involved in the impeachment proceedings as an NSC lawyer serving at the White House.

Lt. Col. Vindman eventually chose to retire from the military amidst further retaliation from President Trump and his political allies, but told CNN’s Erin Burnett that he did not regret “doing the right thing” in telling the truth.

The April 28th event at George Mason University will engage with the ethical decisions that Lt. Col. Vindman faced.

“The past few years have greatly affected us all. There is a sense of a loosening of our personal and community security, the perception of morality and ‘right and wrong’ is questionable, and we are drowning in concepts of ‘fake news’ and distortions of truth,” said Na’ama Gold, Director of Mason Hillel and one of the people organizing the April 28th discussion.

“Despite this, there are special cases, as in the case of Lt. Col. Vindman, that show us that ideas of pursuing justice, truth, and perseverance have not yet passed from the world,” Gold said.

During the event, Lt. Col. Vindman will be introduced by Dr. Gregory Washington, who is president of George Mason University. The discussion will be moderated by Dr. Charles L. Chavis, Jr., Director of the John Mitchell, Jr. Program, and by Dr. Ann Ardis, Dean of CHSS.

Ardis said it was an honor for the College of Humanities and Social Sciences to support this chance for students to hear from Lt. Col. Vindman.

“[This event] features the important role the humanities play in helping our students deepen their understanding of complex moral and ethical questions, so they can make extraordinary contributions to their communities as engaged citizens,” Ardis said.

The role that faith can play in commitment to ethical public service will also be a topic of discussion at the event.

“This event showcases George Mason University’s commitment to the ideal of public service. It also represents our dedication to the academic study of religion and ethics,” said Dr. John Turner, who has been helping organize the event and is a Professor of Religious Studies at Mason.

During the event, the role of Jewish values and philosophy in particular will be expanded upon by Dr. Susannah Heschel, who is the Eli M. Black Distinguished Professor of Jewish Studies at Dartmouth College.

Dr. Heschel is also the daughter of Rabbi Abraham Joshua Heschel, a dedicated Civil Rights faith leader. She previously discussed the way that her father’s faith informed his Civil Rights activism during an August 2020 event at George Mason University organized by the John Mitchell, Jr. Program.

“The beauty and wisdom of the Jewish values [with] which the Colonel grew up really shaped and impacted his action,” said Gold. She hopes the event will provide a space where “our students can learn how faith can be a tremendous, and positive, force in times of conflict and crisis.”